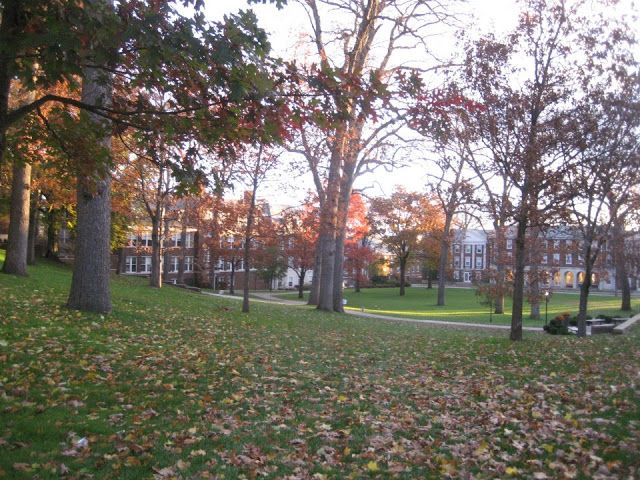 Those of you who read my blog at TeenLife regularly know that I have already covered college visiting twice in previous blogs. I will start by saying that this piece, in addition to being more personal, will focus on one, nearly intangible aspect of the college visit, the one I consider most important of all: the 'feel' of the college.

I don't quite know how to explain this phenomenon, so I will use specific examples of times that some attitude, or the atmosphere, of a college just didn't feel right to me, and when it undoubtedly did.

I think it's fitting to start at the beginning with my very first college visit and provide a sage piece of advice: don't immediately fall in love with the first campus you see. I immediately found myself there, and it was a difficult predicament to overcome. During that first visit, I became enamored by all things college: by the dorms, by the athletic center, by the overall excitement of college students going to class and the prospects of myself doing the same.

Much like Romeo, in the first Act of Shakespeare's Romeo and Juliet, is in love with the idea of love more than with his short-lived obsession Rosaline, so too can a student become entranced by college life but not by the specific college. What's important is to step back, observe carefully, and decide later. In other words, let a college or university sink in before committing yourself, because there is so much to learn about yourself through this process. In this way, students can end up with the college that represents their Juliet - with a happier ending, I hope.

(At least that's how my freshman year English teacher taught it.)

On that first College Visit, I was so fascinated by the news aspects of the life I will live in under a year's time (aspects which almost all colleges and universities share) that I neglected to notice any stand-out features or (more consequently) potentially negative parts of the institution.

Here are some pros and cons of various campuses that I observed, although I won't specifically attach them to separate schools.

Business on Campus and In Town

CON: One college town was home to several shops devoted to a certain illegal-in-most-states plant, which gave me a negative impression of a drug culture at the school which I wasn't totally comfortable with.

CON: Two universities had a number of fast food restaurants in the Student Union, which detracted from the school's positive, different-from-the-rest-of-the-world feeling.

PRO: One university had, on campus, a fleet of food trucks and small eating options which added an aspect of whimsy and fun (as well as urban independent living) to the stereotypically drab world of dining halls.

PRO: One university's campus was a stone's throw from a nice, dare-I-say trendy arrangement of shops and businesses, making it feel like a part of its town, and not detached as some colleges do.

CON: Two schools' outlying administrative and academic buildings all looked like they were once peoples' houses, and sat on residential streets. This gave the feeling that the campus was not tied together aesthetically or geographically, giving feelings of confusion.

CON: At one school, all of the common areas - as well as buildings - looked very small and squished together, giving a choking impression that seemed non-conducive to calm learning.

PRO: Many schools featured buildings that were spacious and well designed, affording a welcoming feel even on an urban campus. Others had the quintessential 'college look', which scores points even with the least sentimental cynic.

PRO: One school's buildings felt like they came directly out of the landscape itself. The architecture and interior design felt like the forest surrounding campus. It was, in a word, impeccable.

NEUTRAL: One schools' buildings were all normal, high rise apartment/business buildings. I'm not sure how I feel about this: on the one hand, it gives a sense of independence and modernity; on the other, it feels oddly disconnected. One school's buildings were all rather short, and gave the feel of an office park.

CON: One institution was bisected by a major road thoroughfare, which - in addition to concerns about noisiness - made the two halves of campus feel detached and disjointed, once again having deeper spatial consequences.

NEUTRAL: One university was in a reportedly dangerous neighborhood. While the campus was stunningly safe (I could feel the security presence), it almost felt like an island; isolated and detached from its own community. On the flip side, it felt like its own, small city, and was complete with anything a student might need.

PRO: Many, many, many campuses are amazingly gorgeous. At least three were actual arboretums. The landscaping at some was top-notch and gave every feeling a traditional quad is supposed to evoke. It's nearly impossible to weigh one against another.

NEUTRAL: All schools (at least the ones I visited) seem to have a wide range of housing options, ranging from traditional dormitories to honors or living-learning communities to suite-style to near-campus apartments. Often, the cream of the crop is reserved for the older students. If you're genuinely worried about housing, look into it, but otherwise I don't think it should matter too much.

Bear with me here, this is the hardest to write down effectively, so I'll try to explain what I decided (after all of my visits) what I liked to see in a school.

My high school was once known as "A Different Kind Of Place," and I suppose I like that in a school. Somewhere progressive and forward-thinking. Somewhere willing to make changes, and (though it knows what it's doing) not caught up in its old practices beyond hope of motion. I like a place where students are happy and unique without being completely counterculture. I like a place that knows what it can do and is not presumptuous about itself.

I like a school where students take pride in their college or university, but don't flaunt it as a status symbol. I like a place where I can learn, but am flexible in what, specifically, that learning entails. I do know that I prefer hands-on, work learning to theory and discussion - though I see the merits of both. I like a place where professors care. I'm not sure what specifically during visits allowed me to determine this, but I knew it when I saw it, and, when you find your ideal mindset, you'll know it too.

What I used this mindset to determine was what everyone told me (and no doubt tells you) to look for on a visit: can you see yourself here? If the students and professors I saw and met seemed (for the most part) to match my idea of a great place, I knew I could answer yes. Knowing what type of attitude I wanted from a school allowed me to pare down my list rather easily and with the final goal in mind.

By the end of my ten college visits, here's how things looked:

Interestingly, the university that I had previously considered a "dream school" felt, when I visited, like a place I felt was not the best fit. This just goes to show how very important visits are. I learned a great deal about myself through this process - more any one school, in fact - and I'm sure you will too.

In the next part, I'll talk about another 'A' ... applications!

This is Part Four of a Series on College Applications. For further explanation, please read Part One.

Blog posts delivered to you weekly

Stay up to date with the latest news, tips, and advice for successful teens and their parents.

TeenLife student, parent and educator members are the first to learn of new developments in the world of experiential learning as well as receive special offers on programs and services that are essential for teen success. Membership is free, so sign up today! Rest assured, we will not rent or sell your contact information to anyone.

Welcome to the Family!

To help create a great TeenLife experience for you, we need to ask a couple more questions. Then, we’ll take you right back where you started.

Welcome to the Family!

To help create a great TeenLife experience for you, we need to ask a couple more questions. Then, we’ll take you right back where you started.